The amazing adventures of Doug Hughes

If You Are Not Doing What You Love, You Are Wasting Your Time

I woke up this morning to see this lovely inspirational quote in my twitter feed:

If you are not doing what you love, you are wasting your time.
– Billy Joel

Don’t you just love quotes like this?  The implication, of course, is that you can always do what you want to be doing.  While I believe this is essentially true, it’s just not that easy.  There’s this pesky thing called “life” which has a tendency to get in the way.  And one also needs to account for self doubt and more practical roadblocks like money and time.

Over the last few days I’ve written about how I want to switch up my life somehow.  Essentially, I want to make a new job for myself as serial entrepreneur.  I am always having ideas for businesses and some of them actually seem good.  Even better, some of them are doable by me. I love developing these ideas and making something out of them.

My question for myself is, if I love doing this stuff so much, why don’t I just freakin’ do it?! My wife would argue that I do.  I spend way too much time in my office working on my idea du jure.  Why don’t I ever feel like I accomplish anything?

I have a particular pattern I follow when it comes to this.  I suspect I may not be the only one who has this pattern. 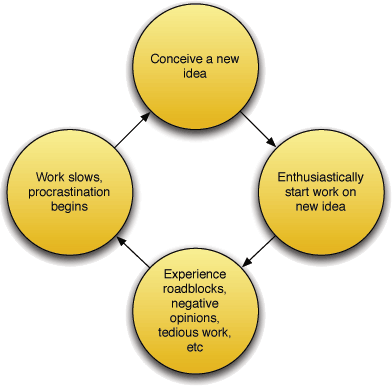 Basically, something happens while I’m working to make me have second thoughts about whether I should be doing this work or not.  Someone might have a negative opinion that hits a nerve.  Maybe there’s work that I don’t want to do.  For example, pretty much anything not-technical.

Once you run into something you don’t want to (or can’t) deal with, love begins to fade.  That may well be one of the most cynical things I’ve ever written, but there’s truth to it.

So, what can I do about this?  Are all my various ideas and projects doomed to failure, half done?  I sure as hell hope not!

I have to remind myself that it took me about seven years to figure out how to make Alagad, my consulting business, into something worth talking about.  I spent years flailing around more or less randomly until something actually worked.

My wife has a story she likes to tell that probably came from Dr. Phil or someone simular.  There was a man who was lamenting falling out of love with his wife.  He used to love her, but he just didn’t have the feeling any more, though he wanted to.  What did Dr. Phil (or whoever) say to this man?  He reminded him that love isn’t just a noun, it’s a verb.  Love isn’t just a thing you feel, it’s a thing you do.

Since I’m no Dr. Phil, I’m going to have to simply say that in my case I’m going to have to try to love what I’m working on, even if I run into self doubt, naysayers, or whatever.  From experience, I can say this is easier said than done.  I’ve always been a doubter.  Without evidence I am always skeptical.

The thing about patterns, especially behavior patterns such as the one I outlined above, is that they’re hard to break.  Those who have ever struggled with weight loss or addiction know what I mean.  To break a behavior pattern you have to do something different, which I’m trying to do.

Yesterday I announced a goal of mine publicly:

I will publish 12 KickStarter projects in the next 13 months, one a month, starting 30 days from now, until all 12 have failed or one has been funded successfully! I will have my first KickStarter proposal submitted by February 16th!

This publicly stated goal (any actually following through on it) is the first thing I’m trying to do to break my patterns.  I’m hoping that if I work publicly, talk about what I’m trying to do and the challenges I run into, that I’ll find a way to keep working and reach my goal.

I’d like to end this article by updating the Billy Joel quote above with a few edits of my own:

If you are only half doing what you love you are truly wasting your time.
– Doug Hughes

What are your experiences in this area?

What happened to Alagad?

Alagad closed permanently in late 2014. I am now contracting independently as Doug Hughes, LLC. Read about it here:

I am also a full-time Java instructor at The Iron Yard.